Secretary of State Rex Tillerson’s remark in Addis Ababa on Thursday that the resignation of a placeholder Prime Minister in Ethiopia was a “very powerful symbol to the strength of the democratic process,” draws surprise and disapproval.

Tillerson also expressed his “concern” over the reimposition of the state of emergency “because it does put restrictions on fundamental rights like assembly and expression.” 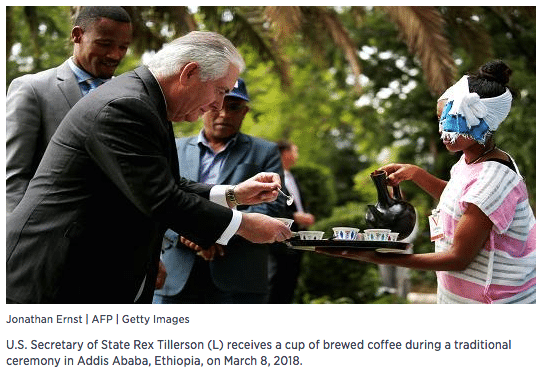 “We firmly believe that democratic reform, economic growth, and lasting stability are best addressed through an inclusive political process, rather than through the imposition of restrictions,” he said at a joint press conference with Foreign Minister Workneh Gebeyehu.

“It is important that that – that the country move on past the state of emergency as quickly as possible. We hope that that can occur,” Tillerson added.

The Secretary’s remark on “democratic process” echoed a similar remark by former president Barack Obama in 2015 who said in his visit to Ethiopia that the ethnic minority dictatorship was “democratically elected government.”

Obama’s comments were decried by opinion makers and media, the likes of the Washington Post.

“I want to acknowledge this voluntary transfer of power. We think that’s a very powerful symbol to the strength of the democratic process here in Ethiopia, and we think it’s important that the parliament, which has been elected by the Ethiopian people, decide who the next leadership be. That’s the way democracies should perform.”

Bronwyn Bruton of the Atlantic Council think-tank says the U.S. is “more interested in supporting the status quo than they are producing a real democracy.”

Tillerson’s visit to five African countries this week has been seen as an “apology” tour for president Donald Trump’s demeaning “shithole” remark on African and Haiti in January.

A day before his arrival in Addis Ababa, Tillerson announced in a remark at the George Mason University a 533 million dollars humanitarian aid to Africa. Ethiopia receives 210 million.
(EW)