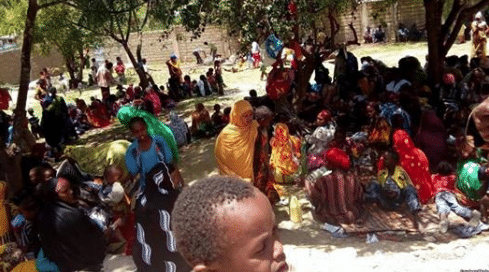 About fifty-thousand people are estimated to have fled the town of Moyale in Southern Ethiopia and crossed into Kenya after security force killed at least ten people on Saturday.

One person was killed and another injured on Sunday, sources told ESAT.

The Mayor of Moyale, Aschalew Yohannes, told the Deutsche Welle Amharic Service that the estimated figures of those who flee the town were obtained from the concerned authorities on the Kenyan side.

Ten people were killed and scores wounded as Agazi forces of the regime arrived in Moyale, a commercial route near the Kenyan border, and rained bullets on residents for no apparent reasons. Residents told several media outlets, including ESAT, that the soldiers shoot people who were just going about their daily lives; some sitting in cafes and restaurants, while others were just passers by.

The soldiers first stop a young man, Golo Waqo, riding his motorbike. They then shoot him at point-blank range. No questions asked. The soldiers then went around town killing nine people, who were just going about their daily activities, including a known and admired school principal, according to the Mayor. 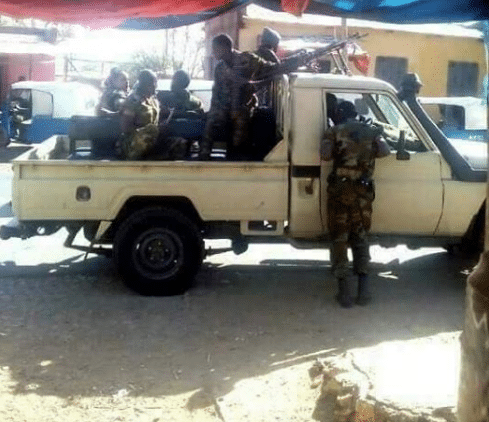 The regime media outlets said the reckless acts of the soldiers were just “mistakes” made after “wrong intelligence.” Lieutenant General Hassan Ibrahim, a representative of the Command Post, the body entrusted with the task of overseeing the state of emergency, appeared on the national television to say the soldiers got “wrong information” that militia belonging to the Oromo Liberation Front (OLF) were in town. The Mayor, however, beg to differ from the General’s description of what happened. Yohannes told several media outlets that the victims were peaceful citizens who were going about their daily lives and there were no OLF soldiers in town. The OLF is outlawed and labelled “terrorist” by the regime that uses such labeling for anything that opposes its brutal rule. The Mayor, however, said there were some movements of the OLF soldiers in the rural areas in the past but even then they had never come to the town.

The region had also seen the displacement of close to a million people last year in what regime officials said was a result ethnic clashes between the Somali and Oromo communities. Others blame TPLF generals involved in contraband trades for inciting the violence.

Meanwhile, Diaspora Oromo activists have called for a week long restriction on the operation of fuel trucks, warning any vehicle found carrying fuel in the country’s Oromo region would face consequences. The call had a visible impact in the capital Addis Ababa today as gas stations were inundated with drivers filling up their tankers.

The executives of the ruling EPRDF coalition are in closed meeting and are expected to call a meeting of the council and elect the leader of the party. The chairman of the EPRDF would be the Prime Minister by default. A newly progressive leaders within the Oromo People’s Democratic Organization (OPDO) have been spearheading a demand for some reforms within the coalition, that is dominated by the Tigray People’s Liberation Front (TPLF).

A state of emergency was declared in mid February, for the second time in two years, after new round of anti-TPLF protests saw the killing of dozens of people at the hands of Agazi forces, a killing squad of the TPLF.

The last three years have seen the death of hundreds, the detention of tens of thousands and the displacement of at least one million people.