Agazi soldiers of the TPLF regime killed at least 13 people in Moyale town, in the restive Oromo region of Southern Ethiopia. At least 25 others were wounded, according to a report by the Oromia Media Network (OMN). The death toll is feared to be higher.

The killings came a day after U.S. Secretary of State, Rex Tillerson, was in Addis Ababa and called for restraint and an all inclusive political process to resolve the political deadlock in Ethiopia. 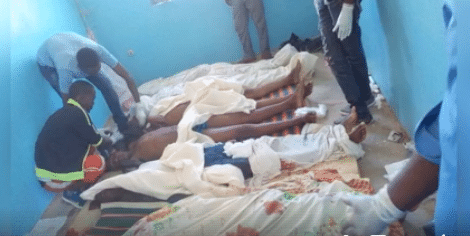 The killings also came amid an all out restriction of movement, assembly and expression imposed by a state of emergency decree.

The report by the OMN says Agazi soldiers had instructed the regional police force to leave Moyale before perpetrating the killings. It is not clear how and why the killings today began in Moyale town, one of the hotbeds of anti-TPLF protest.

Electric power has been cut in the town and several residents are headed to Kenya to save their lives, according to the report.

A staff working at the town’s hospital said he has seen nine bodies and four people with serious wounds. He said those killed were shot in the head, some twice and others three times. He said people are heading to Kenya to escape from the killers. He also told OMN that there are rumors that the Agazi soldiers have kept some bodies in their barracks.

A local man also told OMN that there was no clear cause for why the killings were carried out today. He said the Agazi soldiers told the local Oromo police to leave the town and began shooting people. “They were just shooting at people leaving their mosque and other passers by.”

The town of Moyale sits in a strategic route near the border with Kenya where businesses are sprouting up.

Towns in the Oromo region have been holding business and transportation strikes protesting against a six-month martial law imposed on February 16, 2018.

The Oromos, the majority group in Ethiopia, have been protesting economic and political marginalization by the minority Tigrayan elites who control the military, security as well as political power.

The protest by the Oromos has also been joined by the Amharas and other ethnic groups that demand a fair share of the country’s resources and political power.

Ethiopia has been in a political turmoil and deadly protests for over two years. Hundreds were killed and tens of thousands detained.

About a million people have been displaced.
(EW)