Ethiopian regime security detained a prominent blogger and university professor on the day U.S. Secretary of State, Rex Tillerson was in the capital Addis Ababa and had commended the release of political prisoners last month.

Seyoum Teshome is known for his sharp wit and criticism against a repressive regime that has no tolerance for free expression of ideas. 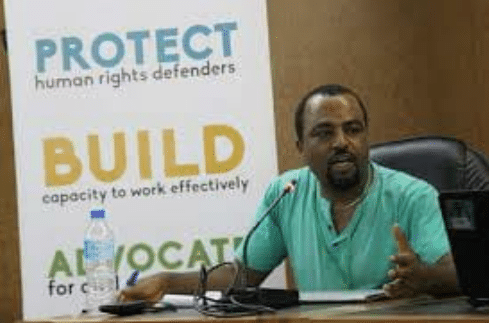 Close friends of the blogger told ESAT that his house was searched and was taken to the Central Investigation Bureau, a.k.a. Ma’ekelawi, a torture chamber for dissidents. Family and friends fear for the blogger who is now detained in one of the notorious jails anywhere. Freed journalists and dissidents have spoken about the horrors of staying in Ma’ekelawi, where Tigrayan interrogators use torture methods like hanging a bottle of water on private parts and removing toenail.

Seyoum has been criticizing the state of emergency on his facebook post. The martial law declared on February 16 states that it is illegal to even criticize the law.

The state of emergency, declared for the second time in two years, came after relentless protests, especially in the Oromo and Amhara ethnic majority regions, against misrule by Tigrayan oligarchs.

The martial law was decried by the U.S., EU and other rights watchdogs.