Congressman Dana Rohrabacher of the 48 district of California and a critic of the Ethiopian regime said the state of emergency had “failed” at the Ethiopian Parliament.

Rohrabacher said in a tweet on Sunday that the 346 votes in favor of passing the martial law fell short of the 359 minimum two-third majority vote needed to pass the emergency decree. 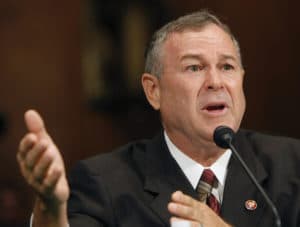 Abadula Gemeda, the Speaker of Ethiopia’s House of People’s Representative on Friday went ahead, struck his gavel, and said the law had passed the House, despite the tally he had announced earlier did not meet the two-third minimum. The news quickly drew condemnation by the public with residents of towns in the Oromo region responded with blocking roads with rocks and burning tires. The weekend turned deadly as TPLF security forces killed six people in Ambo and Guder towns.

Staff at the House of People’s Representatives phoned journalists after the Parliament session was over and instructed them to change the tally in favor of the decree from 346 to 395, and make corrections in their news files.

It is the second tweet on Ethiopia for Rohrabacher in two weeks. “Game over TPLF” he said in a tweet on February 20, tagging prominent Ethiopian activists.

A Committee on Foreign Affairs at the U.S. Congress has given an ultimatum to the Ethiopian regime until February 28 to announce whether it will allow rapporteurs of the United Nations High Commissioner for Human Rights to investigate human rights abuses in the country. That deadline has apparently passed.

Conditions were set that If the regime refuse access to U.N. rapporteurs, H. Res. 128, a resolution by the House on human rights in Ethiopia will be put to the House floor for a vote. The resolution, among others, hold those individuals, including TPLF officials, responsible for crimes committed against innocent citizens.

There is no sign that the Ethiopian regime has agreed to heed the demand by Congress, and a campaign by Ethiopian Americans is in full swing urging Congress to pass the resolution.

Previous repeated requests to the regime by the UN High Commissioner on Human Rights to send its rapporteurs to the country to investigate killings and wide range of rights violations fell on deaf ears.
(EW)