State of emergency tantamounts to declaration of war on people of Ethiopia, says U.S. expert on Africa

An expert on Africa with a Washington think tank says the state of emergency could be regarded as a “declaration of war on the people of Ethiopia” and called on U.S. and EU to “declare that they are not complicit in Ethiopia abuses.”

In her articles and tweets in a week that saw the announcement of a resignation by the Prime Minister and the declaration of a martial law, Bronwyn Bruton, deputy director of the Africa Center at the Washington-based Atlantic Council called on allies of the Ethiopian regime to condemn the state of emergency. 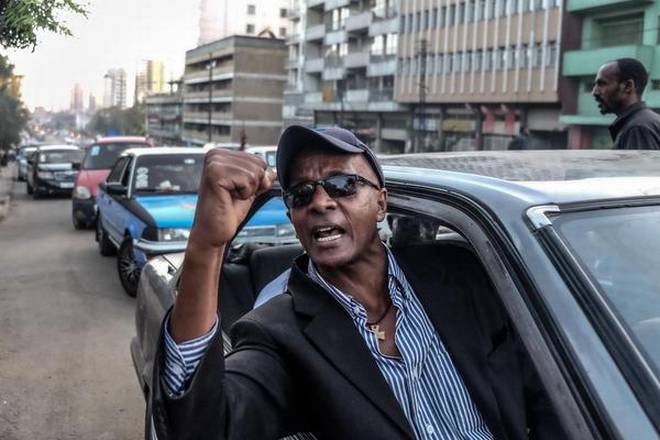 “Ethiopia’s partner nations should act rapidly to express support for the EPRDF’s previous steps towards reconciliation, and their condemnation of the declaration of martial law. Ethiopia’s political unrest has reached its crisis point: inaction now will lead to disaster,” Bruton writes.

“It [the state of emergency] may be regarded as a declaration of war on the people of Ethiopia. It will escalate, not mitigate, the intense political and security crisis that Ethiopia faces today.” she said.

Leading a delegation from the regime, Foreign Minister Workneh Gebyehu was in Washington, DC on Thursday to speak with executives at the Atlantic Council and also officials with the Department of State as well as the White House in what appears to be a last minute effort to sell his government’s pitch that it will “make substantial political reforms and allow for more inclusive, democratic governance.”

But the announcement of the state of emergency on Friday was quickly decried by the African expert at the Atlantic Council, the U.S. Embassy in Addis Ababa as well as a former Assistant secretary of State for Africa.

The Embassy in Addis Ababa made the strongest statement so far against a regime considered by the U.S. as a strategic ally against terrorism in the Horn of Africa. “We strongly disagree with the Ethiopian government’s decision to impose a state of emergency that includes restrictions on fundamental rights such as assembly and expression,” the Embassy said in a statement.

Urging the regime to rethink its approach to solving the crises, the Embassy also said “the challenges facing Ethiopia, whether to democratic reform, economic growth, or lasting stability, are best addressed through inclusive discourse and political processes, rather than through the imposition of restrictions.

Meanwhile, Bruton tweets that “US and EU leaders must speak out against the state of emergency, finally declare that they are not complicit in #Ethiopia abuses.”

“Declaration of state of emergency in #Ethiopia is a horrifying error that will only escalate unrest & crisis. USG and all other governments must condemn @EPRDF and hold it fully accountable for any bloodshed that follows.” Bruton came back with yet another tweet.

“The last state of emergency in #Ethiopia did not stop unrest – just convinced more people that peaceful protest is futile. Now EPRDF is doubling down on its tragic mistake: choosing repression over reform.”

As with the martial law last year that was in effect for ten months, the new one, to be effective for six months with possible extension for another four months, prohibits citizens from any form of expression, assembly as well as publication and dissemination of anything perceived to be a threat against the powers that be.

The repressive regime meanwhile has a constitution which states that such laws would be declared in times of an invasion by a foreign country or similar circumstances that threatens the sovereignty of the country. Critics and opposition to the regime say the martial law was being used to silence the growing public anger against the regime and also to hush the call to an end to an ethnic rule that favors the minority Tigrayans, economically and politically alienating 95% of Ethiopians.

The former Assistant Secretary of State for Africa, Herman J. Cohen fears a takeover by a military dictatorship and called on his government not to allow that to happen.

“In #Ethiopia, instead of an all-parties reconciliation conference, I fear a Middle East type military dictatorship takeover and a zero sum game bloody outcome. USG, do not let it happen,” Cohen tweets.

The former Assistant Secretary is widely believed to have throned the TPLF to power in 1991 when its guerrilla forces walked into the capital Addis Ababa as the former ruler Mengistu Hailemariam flew to Zimbabwe and sought refuge. Cohen was instrumental in mediating the 1991 negotiations between TPLF and Mengistu’s delegates as well as leaders of the Eritrean and Oromo movements.

Cohen even suggests that TPLF leaders, who stand accused of massive looting of the country’s coffers and extrajudicial killings of peaceful protesters, be given assurances that there will be no retribution if they lose power in an election.

“With resignation of #Ethiopia PM, only viable scenario to arrest violent instability is true multi-ethnic interim EPRDF regime, free, fair and transparent elections, & pre-assurances to TPLF leaders there will be no criminal retribution after electorate votes them out.”

Cohen’s tweet has drawn a reaction from Ethiopians, some strong.

“You never made sense on the issue of #Ethiopia from the outset. Ethiopians are well aware of you and your country’s contribution to the coming to power of #TPLF ethno-supremacists and the subsequent carnage,” responded Dimetros Birku.

“The situation in Ethiopia may slide to chaos short of an orderly and credible all-inclusive national dialogue and transition process free from EPRDF control. EPRDF regime has lost all legitimacy and credibility to govern. The demand from the Ethiopian people is fundamental change,” says another response by Neamin Zeleke, a member of an opposition group.

Meanwhile, tension and uncertainty about what could happen in the next few days grips the nation with the people continuing to demand change as well as the release of thousands of prisoners of conscience thrown into prisons and undisclosed detention centers especially since the post election violence of 2005.