The dictatorship in Ethiopia has continued to respond, albeit rather slowly , to public pressure and pressure from the international community that the thousands of incarcerated dissidents be freed. 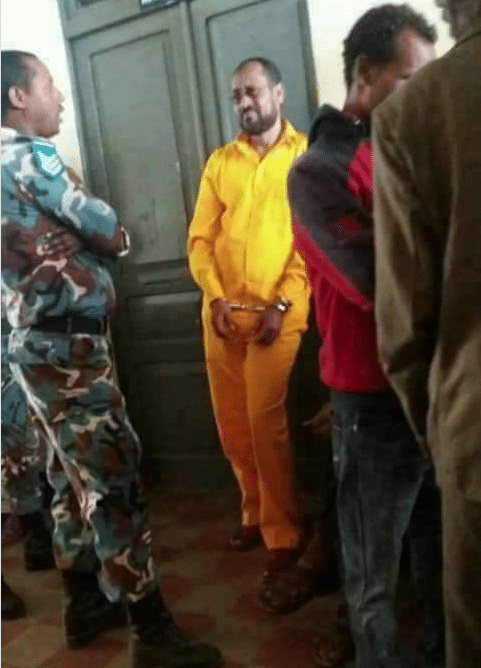 It is not clear if the release include Bekele Gerba, seen here in prison jumpsuit

Media controlled by the regime today reported that the prosecutor general has announced 746 political prisoners have been “pardoned” and would be released upon completion of a propaganda “training” and after the President signs off on their “poardon.”

Among those dissidents mentioned in the report by name are award winning journalist Eskinder Nega and prominent opposition figure Andualem Arage. Nega was sentenced to 18 years and has served over six years. He is a recipient of several international awards by press freedom groups and human rights watchdogs. Arage is the former vice president of the opposition Andenet party. He was charged with “terrorism” and sentenced to life in prison. He has spent over six years.

It is not known if the latest release include several other prisoners of conscience who were thrown behind bars over cooked up terrorism and other charges.

While no prisoner has requested pardon from the regime, legal experts say the use of the term “pardon” was a trap to either bring back cooked up cases and throw dissidents back into prison or to muzzle them from exercising their rights once they leave prison. The experts argued the release was an amnesty, not pardon.

Amnesty or pardon, thousands of Ethiopians were arrested and thrown into jail for either publicly criticizing the regime, in the case of journalists and members of the opposition, or for taking part in protest demonstrations that engulfed the country over the last three years, especially in the Oromo and Amhara regions.

The announcement says of the 746 to be released soon, 417 were found “guilty” of terrorism, religious extremism and of other bogus charges while 329 of them have been on trial for the same cooked up charges. Those “pardoned” today were incarcerated in federal prisons and prisons in the Amhara region.

Critics say the number of those released was just the tip of the iceberg.

Thousands of other prominent political figures, journalists and ordinary citizens are still behind bars for simply exercising their rights.