Nigist Yirga, a young activist from northern Ethiopia, who has been jailed since September 2016, was released today, a family member confirmed to ESAT.

Nigist Yirga, a 24 year old activist known for her viral photo as she took part in one of the protests in Gondar in July 2016, was abducted in September of that year by TPLF security forces and taken to the Central Investigation Bureau, where she was tortured and abused. 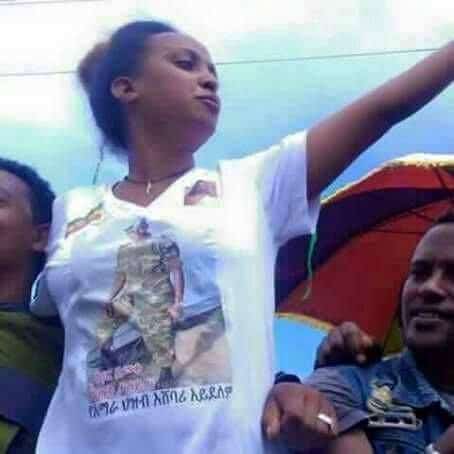 Nigist Yirga in a protest in Gondar in 2016. (social media)

Her photo went viral in 2016 and is still widely popular on social media platforms as she wears a tees with a portrait of Col. Demeke Zewdu, the leader of the resistance in Gondar and the Amhara region. The Colonel was also released yesterday. “Amhara people are not terrorists!,” reads her T-shirt.

Security forces have reportedly abducted Nigist from Sanja, Gondar in September 2016 and accused her of “terrorism” and of being a member of Patriotic Ginbot 7, a group opposing the regime.

Thousands of prisoners have been freed in Ethiopia over the past few weeks as pressure mounts against the regime from all corners of the country, with protesters demanding an end to a dictatorial rule and the release all political prisoners.

Many more thousands of political prisoners and prisoners of conscience still remain behind bars. Among them is an Ethiopian born Briton and a leading democracy activist and opposition figure, Andargachew Tsege, who was abducted by TPLF security from an airport in Sanaa, Yemen in June 2014. He is still held incommunicado.