Ethiopia orders forces to “take all necessary measures” against protesters

A statement issued today by the “Command Post”, the military and security committee overseeing a martial law declared in Ethiopia last week, says the military has been ordered to “take all measures necessary” against civilian protesters demanding political reforms. 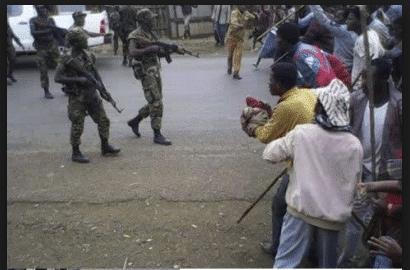 The statement specifically mentioned the renewed protest in the country’s Oromo region, where opposition leaders were banned from meeting their supporters last week, triggering new wave of protest in Nekemte and Dambi Dolo towns.

One person was shot and killed today in Nekemte, while another was killed in Dambi Dolo on Saturday.

The Secretariat of the so called Command Post has instructed security forces to take “all necessary measures” in a bid to quell protests against the regime, according to media controlled by the regime.

Hundreds of people were killed, about 2000 by some estimates, in the East African Country after the country plunged into unrest in late 2015. Tens of thousands of people have been thrown to jail. Some prominent political prisoners have been released few weeks ago in response to pressure from protesters but many more are still behind bars.