The Oromo People’s Democratic Organization (OPDO) one of the parties making the ruling EPRDF coalition has elected Dr. Abiy Ahmed as its new chairman, moving him one step closer to the premiership.

Ethiopia’s Prime Minister for five years, Hailemariam Desalegn, resigned last week amid political turmoil in the East African country where people have been demanding an end to a one party political and economic monopoly by the TPLF. Desalegn has been criticised for being weak and was widely believed to be a placeholder with no real power. 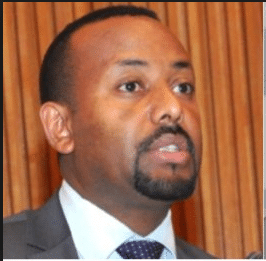 The TPLF, a member of the ruling EPRDF coalition, but in reality an oligarchy that controls the politics and economy of the country has been in disarray after the death of its tyrant, Meles Zenawi in 2012.

The four parties that make up the coalition have been in marathon meetings after the resignation of Desalegn to elect their respective chairpersons who will be representing each party to contend for the position of the Prime Minister.

Dr. Abiy, who was the head of the OPDO headquarters, replaced Lemma Megersa, who was widely expected to contend for the premiership. Megersa now holds the deputy chairmanship and remains at his post as the regional president. Political analysts believe Megersa needs to stay at regional level to continue galvanizing the youth in the region and pushing for wider reforms within the ruling coalition.

The regime imposed a six-month state of emergency banning all forms of gatherings, speech, publications and basic rights of citizens. The martial law has come under attack from the U.S., EU and its member countries as well as rights watchdogs.