A leading figure of the resistance movement in the Amhara region, Colonel Demeke Zewdu has walked out of a prison in Gondar today.

Residents of the city of Gondar and other major towns have began a three day strike today to demand the release of all political prisoners including the Colonel who was taken to jail after a shootout at his residence with operatives of the Tigray People’s Liberation Front (TPLF) in July 2016. 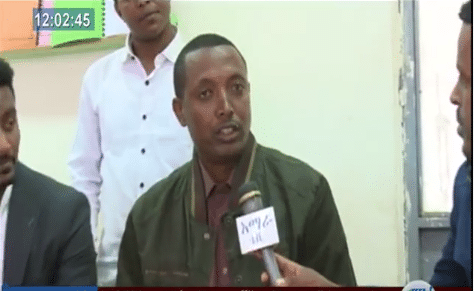 Colonel Demeke Zewdu speaking to Amhara TV upon his release

The strikes that shut down businesses, transportations and schools also came in defiance of a six-month state of emergency declared last Friday.

Colonel Demeke Zewdu led a movement by the people of of Wolkait, Tegede and Telemt in Gondar, who are demanding to reclaim their land that was illegally incorporated into Tigray region when the Tigrayan-led regime took power 25 years ago. A vast agriculturally fertile region in North Gondar was forcefully incorporated to the Tigray region and the people were told by the powers that be that they were Tigrayans not Amharas. It led to a movement by the people in Gondar in bid to restore their identity and reclaim their land.

The Colonel thanked the people in the region, the regional government and security for all they did to ensure his safety and eventual freedom.