The city of Nekemte was covered with plumes of smokes today as protesters burnt tyres and blocked roads angered by the detention and ban on leaders of the Oromo Federalist Congress (OFC), who planned to meet their supporters in the city last Saturday.

Prominent Oromo political leaders including Dr. Merera Gudina and Bekele Gerba, who were released from prison few weeks ago, were on their way to the city to thank their supporters when security forces detained them for hours in the nearby town of Gute and later ordered them to return to the capital Addis Ababa

Video widely shared on social media show security forces firing several rounds. It was not clear if there is any casualties.

Protesters denounce the state of emergency, demand security forces to leave their town and denounce the TPLF regime. “Down, down Woyane,” “Down, down TPLF,” they chanted amid the deafening sound of gunshots.

Thousands of people were waiting in Nekemte for the arrival of leaders of the OFC when they were detained in Gute. After they were detained for seven hours, the politicians were told that there were orders from the Command Post, the body that oversees the recently declared martial law, that they were not allowed to enter Nekemte. 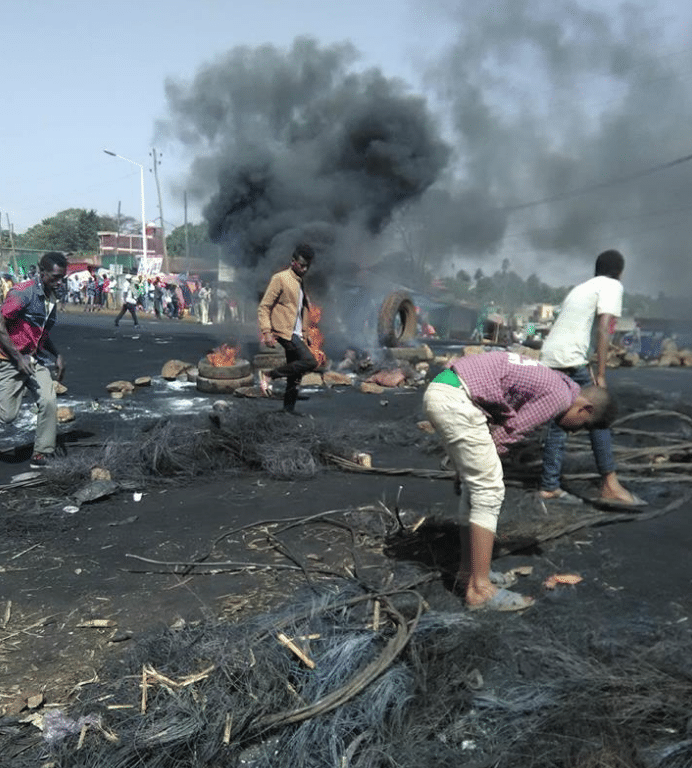 A ban on political gatherings, among other restrictions, was declared a week ago in a state of emergency that was the second to be issued after the country plunged into a crisis in late 2015 when people in the Oromo region held protest demonstrations demanding political and economic rights. Protests have later expanded to the Amhara region. The martial law was quickly lambasted by the U.S., EU and several other countries, some of whom were close allies of the regime.

Close to 2000 people are estimated to be killed by TPLF security forces since the unrest began two years ago. Tens of thousands of people were detained, some tortured, in prisons across the country and in undisclosed locations. The regime has recently released some of the political prisoners in response to mounting public pressure and criticism from the international community.
EW