About ten officers, including Generals and Colonels were released from prison yesterday as part of the release of political prisoners by the regime in Ethiopia, that came as a result of relentless pressure from the people calling for their freedom. They were held for nine years.

In the course of their detention, two of those released yesterday were shot and wounded by the regime’s security. Colonel Demisew Anteneh and Colonel Alemu Getnet were shot by TPLF security officers while in custody following an argument over their treatment by the prison. The officers later blamed the detainees saying they were trying to escape from prison. 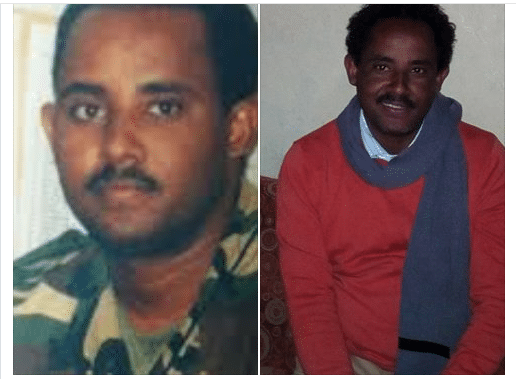 Colonel Demisew Anteneh (before and after his imprisonment)

Over 20 high ranking officers, including Brigadier General Tefera Mamo and Brigadier General Asaminew Tsige were thrown to jail nine years ago on trumped up charges of plotting to carry out a coup. Ten officers, including the Generals were released yesterday following massive pressure from the public and the international community that demanded the unconditional release of political prisoners and prisoners of conscience.

The regime removed the ranks of the two Generals as well as Major General Alemishet Degife and Brigadier General Kumera Asfaw after they had reportedly held a position that the regime had to respect the vote of the people following the controversial 2005 election when TPLF lost in a landslide to the opposition. The Generals had also demanded at the time that the army should not involve in politics. International election observers said the TPLF rigged that election and has continued to stage farce elections to cling to power.

Over 90% of higher positions and ranks in the army are held by Tigrayans. Promotions and benefits unashamedly favor one ethnic group, creating resentment and friction with in the army. Those who speak up will face cooked up charges and jail time.
EW