Eritrean President  Isaias Afwerki said Turkey’s military presence in the Red Sea was counterproductive to the security of the region and that it was not welcome, according to an unofficial translation of his interview with the state media by Tesfa News and other Eritrean sources. 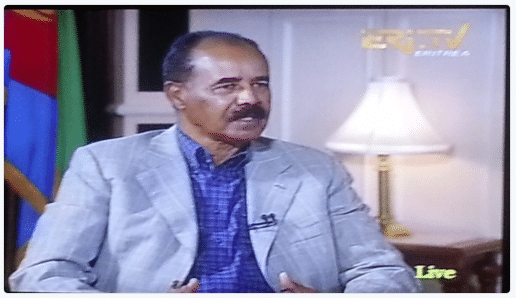 In an interview on Sunday to the state media that focused on regional issues, Afeworki also denied the presence of Egyptian troops in his country as widely reported by Al Jazeera and other outlets. “The Egyptian military in Eritrea story is equivalent to Colin Powell’s weapons of mass destruction and biological weapons lie about Iraq…and it can only come from internally depressed regime in Ethiopia & its masters,” according to unofficial translations of his interview in the local language.

Afwerki was responding to recent developments in the Red Sea that was sparked as Sudan hand over the Red Sea island of Suakin to Turkey. The report by Al Jazeera last week says Egypt, angered by Turkey’s move, had deployed its troops inside Eritrea and Sudan responded by deploying troops along the border with its neighbor. The Eritrean President says that was fake news produced by the country’s enemies.

“Al Jazeera’s fictitious news story of the deployment of Egyptian troops/weapons in Sawa (western Eritrea) is too ridiculous to merit serious response; it can only be described as the Joke of 2018/New Year,” says a translation of Afwerki’s interview as highlighted by Yemane G. Meskel, the Information Minister on his twitter post.

“Fake news peddled against Eritrea in past years by various forces,” G. Meskel quoted Afwerki as saying and referred to stories such as Israeli and Iranian military bases in Dahlak Islands, Israeli Listening Post at Amba Soira (southern Eritrea), deployment of Egyptian troops in Tsorona were all fake and “Motive is to stoke tension/deflect attention.”

The president blamed the TPLF regime in Ethiopia as having a hand in fabricating those fake news. The TPLF regime, Afwerki said, is “at the end of its tether. The political quagmire that has gripped Ethiopia today is the inevitable byproduct of TPLF’s signature policies of  institutionalized ethnic cleavage and polarization. Now it is game over!,” according to G. Meskel’s twitter.

Meanwhile, Egyptian president said on Monday that his country does not meddle in the internal affairs of Ethiopia and Sudan and says it is not going to war against anyone, according to a report by the Associated Press.

“Egypt neither conspires nor meddles in anyone’s internal affairs. We are determined to have good relations (with Sudan and Ethiopia). Our region has seen enough the past few years,”  President Abdel-Fattah el-Sissi said in a televised comment.

“We are not prepared to go to war against our brethren or anyone else for that matter. I am saying this as a clear message to our brothers in Sudan and Ethiopia,” he added.