Turkey says ship seized in Greece for carrying explosives was en route to Ethiopia, not Libya

Turkish authorities say they are investigating a report that a vessel which departed from Turkey and seized by the Greek Coast Guard was allegedly carrying explosives to Libya. Turkey’s Embassy in Tripoli also said the vessel was transporting goods to Ethiopia, not to Libya as previously reported, according to a report by the Libyan Express. 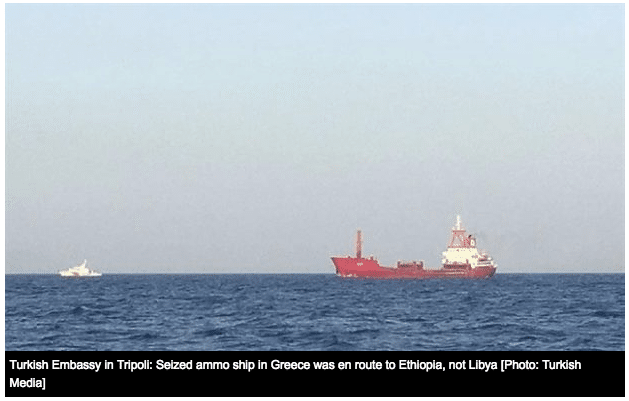 “The materials were headed to Libya,” Rear Admiral Ioannis Argiriou told reporters. He said the material could be used “for all sorts of work, from work in quarries to making bombs and acts of terrorism.”

But Turkey is now saying the vessel was actually heading to Ethiopia and was carrying “goods from Turkey to Ethiopia, not to Libya, and that Ankara has been complying scrupulously with United Nations resolutions.”

EU and UN embargoed the sale, supply or transfer of arms to Libya since 2011.