Some 857,000 people had been displaced in Eastern Ethiopia as a result of  what a joint report by the regime’s disaster management and a UN humanitarian coordination offices called conflict between the Somali and Oromo communities. 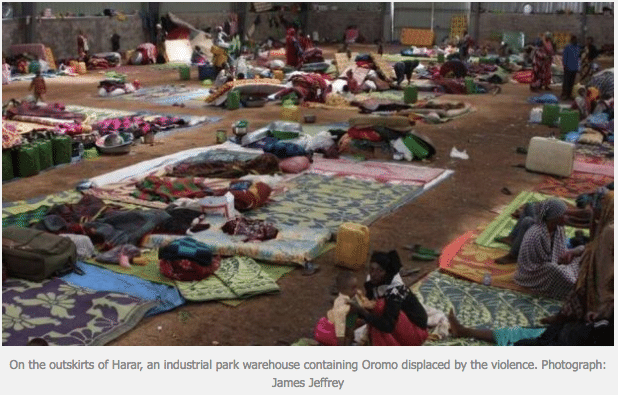 The figures released last week by the National Disaster Risk Management Commission and the UN Office for the Coordination of Humanitarian Affairs (OCHA) were much higher than previous estimates of people displaced in Eastern Ethiopia which critics say was instigated by Special (Liyou) Police of the Somali Region that operate under the direction of TPLF generals.

A member of the Ethiopian parliament said early this month that over 10,000 people were killed in and around the border regions of Oromo and Somali in a violence which a parliamentary report said was perpetrated by the Somali Region Special Police, local police and militia.

The damning report, based on interviews with victims of the violence, squarely put the blame on Somali Region Special Police, local police and militia for perpetrating the killings.

A preliminary data obtained by the displacement tracking system of the International Organization for Migration (IOM) put the number even much higher at 1 million.

Earlier reports indicate hundreds were killed and at least 700,000, mainly Oromos, were displaced since the crisis began a year ago along the border shared by the Somali and Oromo communities.

Victims told the parliamentary committee that they were targeted because they were Oromos. They said sexual violence and abuse, including rape, was committed on their sisters and mothers that has left psychological scar and health crisis.

The OCHA report said the displaced were settled in 400 locations in towns and villages in Oromo and Somali regions, Harar, Dire Dawa and Addis Ababa.