A member of the Ethiopian parliament says over 10,000 people were killed in and around the border regions of Oromo and Somali in a violence which a parliamentary report said was perpetrated by the Somali Region Special Police, local police and militia. 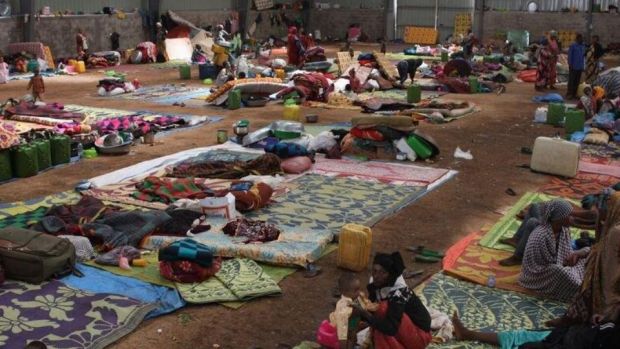 On the outskirts of Harar, an industrial park warehouse containing Oromo displaced by the violence. Photograph: James Jeffrey

Tesfaye Robela was challenging a parliamentary committee that was set up to look into what has so far been described as “ethnic clashes” by the media. He asked why very little has been done to bring the perpetrators to justice. Robela said putting the blame on what the committee called “rent-seekers” and “contrabandists” as having a hand in instigating the violence was not enough.

The damning report, based on interviews with victims of the violence, squarely put the blame on Somali Region Special Police, local police and militia for perpetrating the killings. The report said 98 people have so far been arrested but it was not clear if that includes the security forces that were accused of committing the killings. It took the government 45 days to respond to the violence and the Parliament did nothing to stop it, according to the report.

The parliamentary report that shy away from providing details of the crimes due to what it said was the gruesome nature in the way they were committed has also failed to give exact figures on the number of deaths and displacement. The reports also mentioned that Oromos were displaced due to the violence in Bale and Guji zones.

Earlier reports indicate hundreds were killed and at least 700,000, mainly Oromos, were displaced since the crisis began a year ago along the border shared by the Somali and Oromo communities.

Victims told the committee that they were targeted because they were Oromos. They said sexual violence and abuse, including rape, was committed on their sisters and mothers that has left psychological scar and health crisis.

The report by the committee said killings and displacement has continued even while members of the committee were gathering information and after they had left the regions. It warned the situation was still alarming.