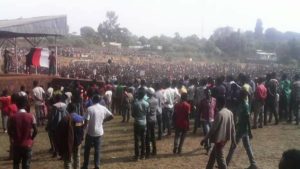 Reports reaching ESAT say regime security forces killed 7 civilians on Monday in Southern Ethiopia as anti-TPLF protests intensified in the region and beyond.

In towns stretching from Yabello to Moyale, Agazi forces of the regime carried out extra-judicial killings against protesters, particularly targeting the Oromos, according to sources.

The road from Yabello to Moyale, a town in the southern border, has been closed as tensions escalate.

Information received by ESAT show some residents of Moyale and its environs were selling their houses and properties at dirt cheap prices to move to the hinterland.

Meanwhile, protest continued in the Oromo region with students denouncing the killing of civilians by the military last week in Chelenqo, Eastern Ethiopia.

Residents of Metu, Nekempte, Dembi Dolo, Wadera, Shakiso, and towns in Hararghe took to the streets denouncing the regime and the killing of civilians in Chelenqo.