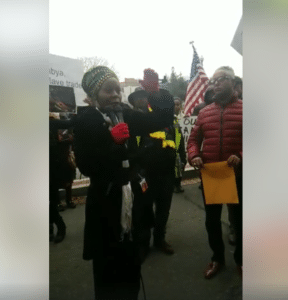 Ethiopians in major cities across the globe today held protest rallies against the horrific abuse of migrants and refugees in Libya where a recent investigative report by the CNN show migrants being sold as slaves.

The report by the CNN that shows slave auctions conducted by smugglers have sparked worldwide indignation against a practice long abandoned by humanity.

Protesters in Washington, DC gathered at the Libyan Embassy to deliver their letter of petition. Diplomats at the Embassy however refused to accept the letter. Following the refusal by Libyan diplomats, an Ethiopian activist and leader of the Global Alliance for the Rights of Ethiopians, Tamagne Beyene and another African activist refused to leave the Embassy premises and have yielded themselves to police custody.

A live transmission of the protest show the two activists have voluntarily surrendered themselves to police custody in a bid to draw attention to the plight of Africans in Libya.

Today’s protest rally was organized by the Global Alliance for the Rights of Ethiopians in collaboration with the Ethiopian Taskforce in Washington, DC and other Diaspora groups.