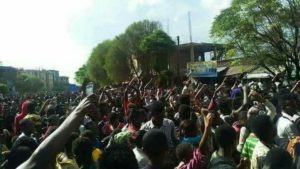 Ethiopia’s universities continued to be hit by protests on Thursday after the death of students last week in ethnic clashes and at the hands of regime’s security forces.

Students are demanding an end to TPLF rule, a regime they say has pitted one ethnic group against the other in a policy of divide and rule.

Meanwhile, residents of several towns in the country’s Oromo region clashed with security forces as they protest against the killing of 18 civilians last week in the town Celenko, Eastern Ethiopia.

Residents of Wolete and Furi just outside the capital Addis Ababa took to the streets and clashed with police.