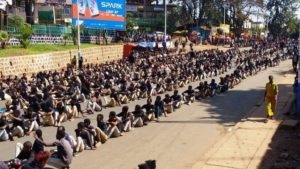 Residents of several towns today denounce the killing of 18 peaceful civilians, including five members of a family in Chelenko, Eastern Ethiopia.

Members of the defense forces on Monday shot and killed 18 people, execution style, while the victims were on a farm work.

Reports say the army was patrolling in the area to quell protests. Having seen the arrival of the soldiers, protesters ran away but the army rain bullets on the victims who were just taking a break from farm work, according to the BBC Afaan Oromo

Five members of a family, including a 15 year old, were killed on Monday in what is now known in the social media circle as the ‘Chelenko massacre.’

President of the Oromo region, Lema Megersa, said his administration was neither aware nor gave permission to the army to be in the region. He vowed to bring the perpetrators to justice.

The killing in Chelenko intensified the anti-government protests in towns all over the country and in Universities with protesters calling for the removal of the TPLF regime.