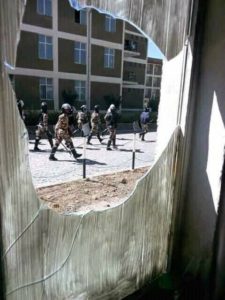 As protest intensifies against its rule, the regime in Ethiopia blocked social media and jammed satellite transmissions by the Ethiopian Satellite Television and Radio (ESAT).

Facebook and Twitter were down since Tuesday and satellite broadcasts by ESAT were down after repeated jamming.

The regime routinely shuts down social media, Internet and broadcasts by independent media abroad when protests gain momentum to stop the dissemination and sharing of information by protesters.

The management of ESAT said the latest jamming only reflects the desperation of the regime which routinely blames independent media outlet like ESAT.

“We have been jammed over 28th times by the TPLF regime. But no amount of jamming will prevent us from returning to air in a couple of days,” said Abebe Gellaw, Executive Director of ESAT.

“The root cause of the crisis is the inequality, injustice, corruption, gross human rights violations and crimes against humanity being perpetrated by the brutal Tigrian minority regime. As long as the grievances of the oppressed people of Ethiopia are not radically addressed, jamming media outlets and shutting down the Internet will only expose the desperation a regime on the brink of collapse,” he said.

Ethnic clashes and anti-government protests in universities and in several towns across the nation claimed the lives of scores of people in recent weeks.

The deadliest was in Chelenko, Eastern Ethiopia where at least 15 people were killed by security forces. Among the dead were women and children. The regional president, Lema Megersa, confirmed the deaths in a televised statement. He vowed to bring the perpetrators to justice. Several towns today held rallies in protest against the killing of civilians in Chelenko.

The killing of protesters in Eastern Ethiopia has been blamed on the Special Police force of the Somali region.

Ethnic clashes in Eastern Ethiopia led to the killing of hundreds of Oromos and the displacement of about 700,000 people. Oromo activists hold the Somali Special Police responsible for the killings.

The United States Embassy in Addis Ababa said in a statement on Wednesday that it was “troubled and saddened” reports of violence in Chelenko.

“We are troubled and saddened by reports of violence that has resulted in deaths and injuries in the town of Chelenko and at several universities over the past two days,” the US embassy in Ethiopia said in a statement.

Meanwhile, according to reports, police in Ambo town, 72 miles west of the capital Addis Ababa, killed two soldiers of the regime who were shooting at protesters.

At least 14 universities across the nation have been shut down as students boycott classes in protest against the regime.