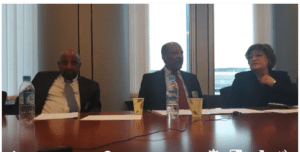 The coalition, Ethiopian National Movement (ENM), today urged all stakeholders to work towards the establishment of a transitional government of national unity in a bid to save Ethiopia from slipping into an instability of regional and global consequences.

Leaders of the ENM, who presented their “program of transition towards a sustainable democratic order in Ethiopia” at the European Parliament, also called for the convening of “a national conference of all stakeholders, including political organizations and civic groups inside the country and all those forced into exile.”

The road map, as presented by chair of ENM’s executive council, Dr. Dima Nego, says the main task of the transitional government would be, among others, to conduct free, fair and credible elections.

“The Ethiopian National Movement (ENM) will do all within its ability to mount internal and external pressures to bring the regime to the negotiating table. If the intransigence of the regime persists, the ENM would employ all nonviolent means of popular resistance to bring an end to the authoritarian and divisive regime, so that the country is put on a path of transition towards a sustainable stable democratic order,” says the document presented at the European Parliament in Brussels today.

Speaking to ESAT from Brussels Dr. Nego said an all out crisis is already in the making in Ethiopia and foreign allies of the regime have now come to realize the fact that maintaining the status quo would not bring any solution.

Prof. Berhanu Nega, chairman of Patriotic Ginbot 7, a member of ENM said on his part that it has become abundantly clear to western governments that are allies of the regime that the TPLF cannot bring any remedy to the political crisis unfolding in the country and in fact they have come to know that the regime was the problem.

Nega told ESAT that opposition forces that represent a diverse group of ethnic groups like ENM have long reached at a common understanding and came up with the solution to the political quagmire the country is currently in. He said this unity among the opposition has now been clear to western powers that have been supporting the regime. Nega says western governments are convinced that a national conference of all parties and a transitional government is the way forward.

ENM’s road map document also details the role of the national conference and the tasks of the transitional government which the Movement says should not exceed four years.

Today’s public meeting at the European Parliament was organized by Ana Gomes, a member of the Parliament and was attended by MPs, experts, representatives various organizations as well as Ethiopian political and civic groups.