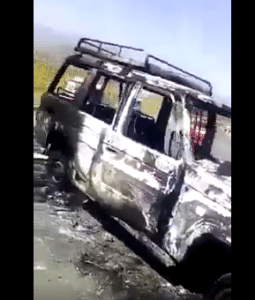 At least four people were killed on Sunday when a spat between soccer fans turned a violent protest against the TPLF regime.

Several sources told ESAT on Sunday that Agazi forces of the regime opened fire at Woldia City FC fans who had come out to protest hate speech and racial slur hurled at them by fans of the Mekele City FC.

Residents of Woldiya, irate over racial slurs hurled by fans from Mekelle, have reportedly set ablaze businesses and residents of supporters of the TPLF regime.

Reports also indicate that Tigrayans who own hotels and buildings had let Agazi forces use rooftops as vantage points to carry out shootings on residents. The residents in turn attacked buildings and hotels owned by the Tigrayans.

Protests have spilled over to other towns in the Amhara region as the regime deployed Agazi forces to quell the anti-TPLF protests. Special forces from Tigray who disguised themselves in uniforms of the Amhara special forces have reportedly attacked residents in Raya, Kobo, Haik and other towns where tension remained high on Monday.

Meanwhile, four members of the Amhara special force in Gondar have quit their post on Sunday protesting the killing of their compatriots in Woldiya by TPLF forces. The search to find the soldiers still continued, according to sources.