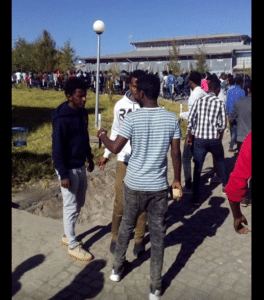 At least six students were killed in what appears to be an ethnic motivated attack in the Adigrat University in Tigray and Woldiya University in the Amhara region.

The killing of two students who are from the Amhara and Oromo regions in Adigrat on Friday have sparked protests in Universities in Ambo, Woldiya, Gondar and Bahir Dar on Monday.

ESAT cannot independently confirm the number of killed in Adigrat but there are fears that more students might have been killed in the weekend attack, according to sources. Several students were also injured.

Students in Bahir Dar and Gondar staged rallies in protest against the killing of students in Amhara. Eleven students of Gondar University were injured as police disperse the protest.

A source who spoke to ESAT said security forces have entered the four campuses of Gondar University. Several students have left the campuses in protest and took refuge in churches and neighborhoods.

A fire has reportedly broke out at the Debre Tabor University where security forces entered to quell protests on Monday.

Students in all campuses have denounced the ethnocentric regime its policies for emphasizing their ethnic differences than their oneness.