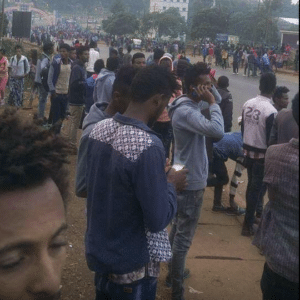 Students of Jimma, Haromaya and Wollega Universities continue boycotting classes saying authorities did not heed to their demands.

One of the demands by the students was a call for an end to the torture, killings and other human rights violations in Borena and in areas along the border between the Somali and Oromo communities. The students demand that the TPLF regime refrain from extrajudicial killings in the Oromo region.

The over 50,000 students left their campuses last week. Negotiations by university officials and elders to convince students resume classes have not worked.

Hundreds of ethnic Oromos have been killed and about 700,000 displaced from the Somali region of Ethiopia in what close observers say was ethnic clashes instigated by the regime.