Egyptian media reported that foreign minister Sameh Shoukry is set to arrive in Ethiopia on Tuesday for talks with his counterpart Workneh Gebeyehu to “break the deadlock” in tripartite negotiation over the construction of Ethiopia’s Renaissance Dam. 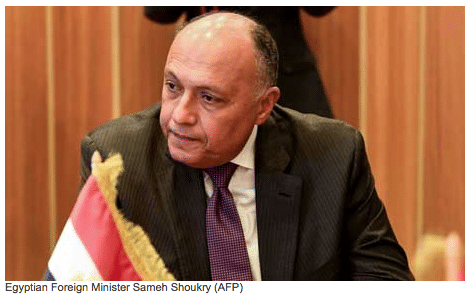 The two sides are expected to iron out their differences regarding the work of the tripartite technical committee of Egypt, Ethiopia and Sudan, which is studying the effects of construction of the Grand Ethiopian Renaissance Dam (GERD) on downstream countries, according to a report by Ahram online.

“Shoukry’s visit comes as an effort by Cairo to resolve disagreements, based on Egypt’s full commitment to the framework of the March 2015 trilateral agreement known as the Declaration of Principles signed by Egypt, Sudan and Ethiopia,” Egyptian foreign ministry spokesman Ahmed Abu Zeid said in an official statement on Monday.

The statement stressed that the declaration requires all parties to adhere to the findings of independent foreign consultancy firms on the number of years Ethiopia could fill the dam without harming the water share of downstream countries.

The ministry said Egypt has goodwill and a desire to build trust with the other parties, but is keen on the preservation of Egypt’s “legitimate” water interests.

According to Abu Zeid, Shoukry will offer suggestions and ideas to other parties with the aim of helping them promptly adopt the finding of the initial report prepared by the foreign consultancy firms.

The statement by Abu Zeid comes one day after Egypt’s presidency spokesman Bassam Rady said that Cairo is committed to a peaceful course in negotiations on the Grand Ethiopian Renaissance Dam (GERD). But he reiterated that Egypt’s supply of Nile water is “a matter of life or death for the country,” echoing statement by Egyptian President Abdel-Fattah El-Sisi.

Last November, negotiations between the three countries broke down over how to conduct technical studies of the dam’s potential impact on downstream countries.

Ethiopia hopes to be able to export electricity generated by the dam, which will be the largest hydroelectric power plant in Africa.

Ethiopia maintains that the dam will not have any negative impact on Egypt or Sudan.