Egypt has called for World Bank mediation to resolve a stalemate with Ethiopia that is building a hydroelectric dam on the Abay River. Egypt says the construction of the dam will significantly reduce its share of water. 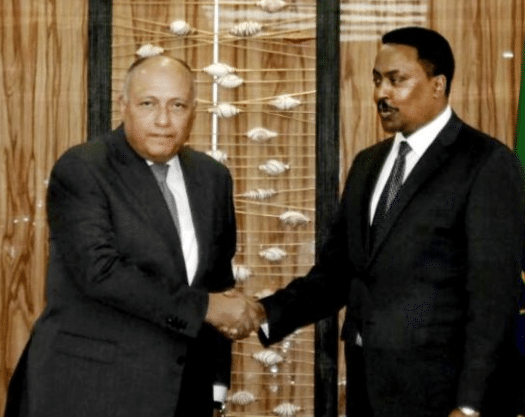 Egyptian Foreign Minister Sameh Shoukry was in Addis Ababa on Tuesday to hold talks with his Ethiopian counterpart, Workneh Gebeyehu.

“Egypt has recognized the importance of economic development to Ethiopia . But science should be the determining factor on how we manage this important issue,” Associated Press quoted Shoukry as saying on Tuesday in Addis Ababa.

According to the report, Foreign Minister Workneh Gebeyehu said Ethiopia will consider Egypt’s new proposal and that the dam “is not going to cause any significant harm.”

Both countries say water is “a matter of life or death.”

The two sides were expected to iron out their differences regarding the work of a tripartite technical committee of Egypt, Ethiopia and Sudan, which is studying the effects of construction of the Grand Ethiopian Renaissance Dam (GERD) on downstream countries, according Egyptian media reports.

Last November, negotiations between the three countries broke down over how to conduct technical studies of the dam’s potential impact on downstream countries.

Egypt is now calling the World Bank to mediate saying the Bank is “neutral and decisive” for a negotiation that is “devoid of political interpretation and manipulation.”