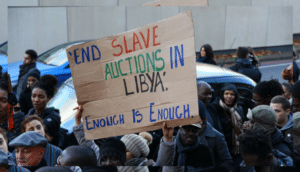 A demonstration will be held on Tuesday in Washington, DC in protest against slave auction in Libya.

African Diaspora groups in the DMV area in collaboration with African Lives Matter-London have organized the rally which begins at 9:00 AM Tuesday at the Libyan Embassy in Washington, DC and head to the State Department.

The Libyan slave auction first surfaced in a CNN International video early in November drawing condemnation against the long abandoned and inhumane practice.

The demonstrators will demand all African leaders immediately repatriate migrants held captive and for the Libyan government close remaining detention camps and release migrants to UNHCR, according to Connie Denton the organizer of the march.

Several African Diaspora groups will take part in Tuesday’s rally. The Ethiopian groups, the Global Alliance for the Rights of Ethiopians and the Ethiopian Taskforce in Washington, DC have called on Ethiopians in the DMV area to join in the rally.

Meanwhile, members of the Congressional Black Caucus (CBC) today held a closed-door meeting with Libyan Ambassador Wafa Bughaighis to discuss a recent report from CNN International that included video documentation of a slave auction in the North African country.

The meeting follows a letter sent by the CBC to Ambassador Buhaighis demanding an immediate investigation into the existence of slave auctions and forced labor and the introduction of a resolution in Congress calling on the Trump Administration to develop strategies to rapidly respond to the migrant and refugee situation in Libya, according to a press release.

The resolution also demands that the government of Libya conduct an immediate investigation into the slave auctions taking place in the country.