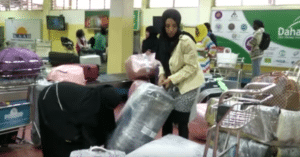 At least 1,300 Ethiopians have been deported from Saudi Arabia as the Kingdom’s crackdown on undocumented immigrants began last week.

In March, Saudi declared a 90-day amnesty for undocumented immigrants to leave the Kingdom and return legally. That amnesty was extended twice before authorities began deporting undocumented workers last week.

Over 70,000 Ethiopian nationals have been repatriated during the amnesty’s extension but thousands more have decided to stay behind and take chances.

Most are economic migrants looking for daily labor and women to work as maids, but there were still political exiles who escaped persecution back home. Many fear the worst for these political immigrants once they fell in the hands of the Ethiopian security.