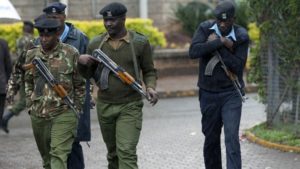 The Xinhua report said the arrest was carried out in a security operation at a residential estate in Nairobi.

The report quoted area police commander Joseph Gichangi as saying the Ethiopians had sneaked into the country from Moyale by road and were in the process of being smuggled to South Africa.

“The 132 suspects were arrested on Friday afternoon in a residential house in Mihango. We don’t know how they passed many police roadblocks without being detected,” Gichangi told journalists in Nairobi.

He said during the sting operation, the security officers arrested two Kenyan nationals profiled as transporters in the illegal human trafficking trade.

A similar operation carried out on Oct. 6 in Mihango led to the arrest of another 67 Ethiopian immigrants, according to the report.

Police and immigration officials have decried increased cases in which Ethiopian nationals are nabbed in the country while on transit to Tanzania or South Africa.

On several occasion the immigrants were found locked up in congested rooms in Kenyan towns and cities but the trade continues to thrive even as many were repatriated.

Ethiopian immigrants use Kenya as a transit country to South Africa and even Europe to flee political persecution and in search of better economic opportunities.