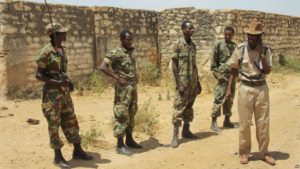 Hundreds of Ethiopian troops have crossed into Somalia to help new offensive by the Somali government against Al-Shabaab militants.

The VOA report quoted residents in the border town of Dolow, in Somalia’s Gedo region, as saying that they saw at least 30 vehicles carrying Ethiopian troops crossing into Somalia late Tuesday. The locals estimate that about 1000 Ethiopian troops have entered Somalia on Tuesday.

There are already thousands of Ethiopian troops as part of AMISOM, the African Union Mission in Somalia.

The troops in this new deployment are said to help boost Somalia’s army that vows to defeat Al-Shabaab militants, who are blamed for last month’s truck bombing attack that killed over 300 people in Mogadishu.

Ethiopian troops have first set their boots on Somalia’s soil in late 2006 but have recently withdrawn in huge numbers citing lack of financial help from western powers.

The new deployments are a response to a call by Somalia’s president Mohamed Abdullahi Mohamed to his neighbors to help him in his fight against the militants.