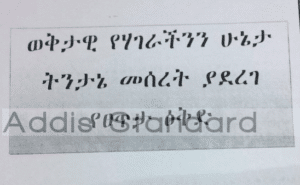 The Ethiopian regime blames neighboring Eritrea and Egypt for the unrest in the country. The regime also said a genocide has been committed in the recent ethnic violence in the Eastern part of the country along the border between the Somali and Oromo communities.

A security plan of action document presented at the national security and intelligence council meeting last week called the killings “genocide” in ethnic conflict between the Somali and Oromo communities.

The document exclusively published by the Addis Standard said forces “with no name” and who “do not take responsibility” for their actions have committed acts of “terrorism” that left “moral and psychological scar” on the people.

The document further said that “anti-people forces, supported by Egypt and Eritrea, have colluded to disrupt the peace and dismantle the constitutional system through violence.”

The document failed to provide numbers but said people have been killed and those who survived have been displaced from their villages in the recent unrest between the Somali and Oromo communities.

The document blames what are now being called the “usual suspects” for any unrest in the country. The regime routinely blames Patriotic Ginbot 7 and the Oromo Liberation Front; and accused that neighboring Eritrea and Egypt are working to destabilize the country through support to these groups. It also accuses that those groups are “raising funds to buy weapons” and “augmenting their strength” to declare war on the country.

As a result of the unrest, the document continues, the country’s economy has tanked and there are indications that some investors have taken their money outside the country. Some are engaged in hiding foreign currency and there is a widespread and illegal transfer of money, according to the security document.

Hundreds of people were killed and hundreds of thousands displaced as a result of ethnic clashes between the Ethiopian Somali and Oromo communities along their border in Eastern Ethiopia. Witnesses told ESAT that regime’s army generals and their forces are responsible for instigating the conflict and perpetrating the killings.