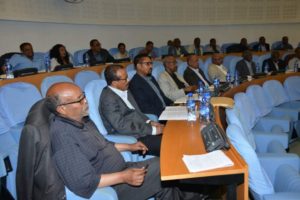 Reports reaching ESAT say a marathon meeting by the central and executive committees of the Tigray People’s Liberation Front (TPLF) continues in Mekelle despite a deadlock.

Increasing number of members of the central committee are also walking out of the crisis meeting, according to ESAT sources. Azeb Mesfin, the widow of Meles Zenawi, who had controlled the party with iron fist, has reportedly walked out of the meeting yesterday and never returned.

One of the the focus of the meeting, that began early October, was a discussion on a 59 page document presented by the leadership which critique the Font for failing to achieve stated goals due to undemocratic practices and corruption within the leadership.

The TPLF is a small clique representing a minority that controls every aspect of the over 100 million people. There has never been any change in the political leadership in Ethiopia for the last 26 years.

With the blessing of western governments, the TPLF took power in Addis Ababa in 1991 upon the demise of the communist regime led by Mengistu Hailemariam. It has since been in power holding a bogus election every five years.

Politically, the country is in shambles. Pressure has been mounting from all corners of Ethiopia against the regime with protest rallies calling for its removal intermittently staged in the last three years, especially in the Oromo and Amhara regions of the country.

Economically, the country is in deep crisis. Hard currency is hard to come by. Export trade has stagnated and foreign direct investment is non existent. The regime’s attempt to attract investment by devaluing its currency by 15% last month does not seem to yield anything.

The TPLF is holding a crisis meeting amid political and economic crisis in the nation. The average Ethiopian doesn’t seem to care what the outcome of the meeting would be. The people have said time and again that they are done with TPLF’s misrule.