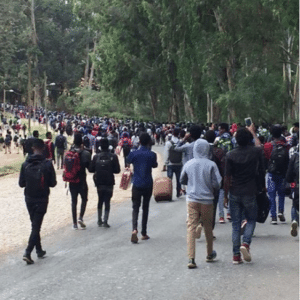 Protest by university students against the regime in Ethiopia continued as about 35,000 students of the Haromaya University left their campuses.

The students of Haromaya University had left their campuses a week ago but returned as the Aba Gedas, traditional leaders of the Oromos, promised to broker a deal and obtain a favorable response from authorities.

The students demand that the spy network of the regime in their campus should be abolished. Students say the “peace forum” as it is euphemistically called, is a group set up by the regime to spy on students.

In another development residents of Sawla town in Gamu Gufa Zone had burnt down the local tax office in protest against tax hikes. The locals say they would not give their money to a regime that tortures and kills citizens.

In the eastern commercial town of Aweday, residents blocked highways while in Wollega, in the towns of Mendi and Bigg, protesters demand regime’s army to leave their towns. They accused that the army had carried out extrajudicial killings.