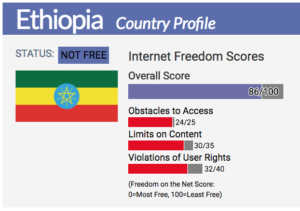 Ethiopia has suffered a dramatic decline of internet freedom over the past year, according to an annual report by Freedom House.

The report said Internet and mobile phone networks were deliberately disrupted during anti government protests and student exams; social media and communications platforms were periodically blocked throughout the year.

Self-censorship heightened following the state of emergency instituted in October 2016, the report added.

The freedom House report cited the Computer Crime Proclamation enacted in June 2016 which criminalizes online defamation and incitement and strengthened the government’s surveillance capabilities by enabling real-time monitoring or interception of communications.

The report recalled many people were arrested for online speech or protests and some have been handed down years of prison sentences.

The report quoting the International Telecommunications Union (ITU) said
Ethiopia is one of the least connected countries in the world with an internet penetration rate of only 15 percent. Mobile phone penetration is also low at 51 percent which the report said stem from underdeveloped telecommunications infrastructure, which is almost entirely absent from rural areas, where about 85 percent of the population resides.

It said a handful of signal stations service the entire country, resulting in network congestion and frequent disconnection.

Access to ICT services remains prohibitively expensive for most Ethiopians, largely due to the government’s monopoly over the telecom sector, which provides consumers with few options, the Freedom House report said.