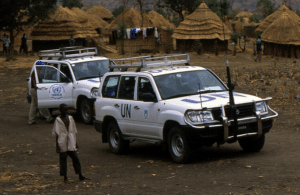 The Information Network Security Agency (INSA), Ethiopia’s spy agency, is using UN budgets and vehicles with UN tags to conduct surveillance, intimidation, arrest and to even carry out executions of dissidents in Ethiopia, according to well placed ESAT sources.

The UNHCR and the Ethiopian regime have a joint programme called the Administration for Refugee and Returnee Affairs (ARRA) that was formed to receive and assist refugees from Somalia, South Sudan and Ethiopia with budget from the UN.

But ESAT sources say money given to the programme by the UN and vehicles with UN tags have been used to spy and torture dissidents. The UN allocates millions of dollars of budget to run 26 refugee camps with about 850,000 refugees. Some of that money, according to sources, is being embezzled by officials of the spy agency that is also in charge of security protection at the camps. ARRA operates under INSA, it was learnt.

The sources also say the UNHCR has brought to the attention of the spy agency about the millions of dollars that is missing in the balance book of the joint programme. Bosses with the spy agency have also failed to reconcile huge amount of money meant for expenses related to refugee operations. The sources allege that the spy chief, Getachew Asefa, his former deputy Esayas Wolde Giorgis and deputy director with ARRA Zeinu Jemal are responsible for misappropriation of the funds. The sources say that the officials have sent their kids to ivy league schools in the capital and abroad allegedly using the money from the UN.

Meanwhile, the sources also exposed that INSA has regularly used the UNHCR refugee programs to send its informants and operatives abroad disguised as refugees from Eritrea. They then spy on Ethiopians in the Diaspora.