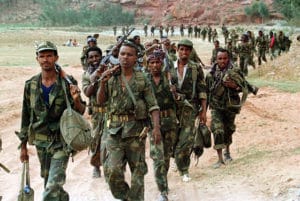 As search for soldiers who are said have deserted from the army in Southern Ethiopia continued, new reports indicate that one soldier was killed in a shootout between a commander and soldiers who were dispatched to search for the deserters.

Thirty-eight soldiers with the 10th division of the army in southern Ethiopia disappeared Monday along the country’s border with Kenya. It is now confirmed by ESAT sources that they had actually deserted the army.

ESAT’s sources said two soldiers in the search group who are ethnic Oromo have destroyed an electric line to show their support for the deserters and also express their anger against their commander who is ethnic Tigray. That resulted in a shootout between the soldiers on one side and the commander and his guards on the other.

Several search teams sent to the area have returned with no luck. The latest team sent for a search ended up with a shootout with the commander by the name Gedo and his guards.

Minority ethnic Tigrayans control the Ethiopian army creating resentment on the part of other majority groups.

It was learnt that the deserters were mainly Oromos.