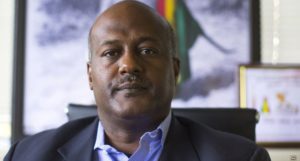 Patriotic Ginbot 7, an armed opposition to the Ethiopian regime, said a security plan of action document leaked yesterday to the media shows the regime in Ethiopia is teetering on the brink.

A leaked security document first published by the Addis Standard on Monday blames Patriotic Ginbot 7 and OLF for the unrest in the country. The document accused that the groups are supported by Egypt and Eritrea; and are bent on to disrupt the peace and dismantle the constitutional system through violence.

ESAT’s attempt to reach OLF representatives for a response has failed but a member of the leadership for PG7, Neamin Zeleke, responded saying the document was another evidence that the regime is gasping for the last breath.

“The regime is planning to continue the persecution and killing of citizens as it is clearly in a desperate state,” Neamin Zeleke added.

The security plan of action document presented at the national security and intelligence council meeting last week also said “genocide” has been committed in the recent ethnic violence in the Eastern part of the country along the border between the Somali and Oromo communities.

The document blames the “usual suspects” for the unrest in the country. The regime routinely blames Patriotic Ginbot 7 and the Oromo Liberation Front. The security document accused that neighboring Eritrea and Egypt are working to destabilize the country through support to these groups. It also accuses that those groups are “raising funds to buy weapons” and “augmenting their strength” to declare war on the country.

Witnesses told ESAT that regime’s army generals and their forces are responsible for instigating the conflict and perpetrating the killings.

Mr. Zeleke says if the leaked document is any indication, the regime is determined to continue violating the people in a desperate effort to continue cling onto power.