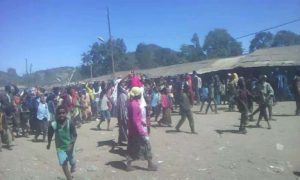 Security forces killed six people in Eastern Hararghe where protests have continued for several days against the TPLF regime.

Chelenko, Gursum, Bedeno, Babile, Aweday are some of the towns in Eastern Hararghe where residents took to the streets to protest but met with deadly forces by security forces.

Agazi forces of the regime and the Somali special police have reportedly shot live bullets to disperse protesters.

In Adama, a.k.a. Nazareth, two people were killed by security forces as they tried to prevent the demolition of their houses.

Residents of Adama took to the streets in protest against the killing of the two people and blocked a major highway connecting the town to Asela. They have also seized two heavy duty trucks loaded with sugar.

Meanwhile, protest by university students against the regime continued in several campuses. Students of Ambo University have left their campus after their demand to authorities for the abolishment of a spy network fell on deaf ears.