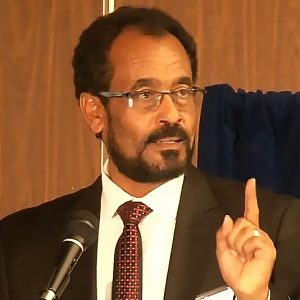 A cassation bench with the Ethiopian Supreme court has reportedly overruled an earlier decision by the court to grant bail to Bekele Gerba, a leading opposition figure incarcerated for over a year and half on charges of terrorism.

The court over the weekend granted bail to Gerba as per the defense request that his charges were reduced to criminal offences and the law does not deny bail to the defendant for criminal charges.

Bekele was among 20 others who were imprisoned in April 2015 at the height of protests in the Oromo region accused of inciting the unrest, uprising and civil war, charges Gerba vehemently denies. His terrorism charges were later reduced to criminal offences.

Legal professionals approached by ESAT say both decisions to grant bail and later to suspend were politically motivated. They said opposing groups within the TPLF were flexing their muscles and using the courts to influence decisions of political significance.

Gerba was still in jail after he was granted bail on Monday as prison administrators refused to release him saying there were mistakes on the file number of the defendant, which critics say further confirms what all suspect that his arrest was politically motivated.

Political commentators say some within the TPLF believe that releasing Gerba will quell the growing opposition across the nation against its rule, especially in the Oromo region of the country.

Bekele Gerba, who was the deputy chairman of the Oromo Federalist Congress, had been imprisoned for almost five years between 2011 and 2015 accused of being a member of the Oromo Liberation Front that was outlawed by the regime. He was arrested again on terrorism charges in April 2015 at the climax of protests in the Oromo region.