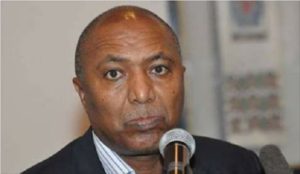 Authorities in Addis Ababa are conducting an investigation into a 4 star hotel and other properties that are allegedly owned by Bereket Simon, a leading member of the ruling party who recently resigned from his post as deputy head of the Ethiopian Policy Research Institute, according to ESAT sources.

The investigation has specially zoomed in on the Doubletree Hotel, a 4 star hotel near the Bole International Airport, the construction of which is scheduled to be completed soon.

The investigation also focuses on other properties allegedly owned by Bereket Simon that are registered under the names of other individuals. The Doubletree Hotel, managed by the Hilton, is registered under the name of Teka Asfaw a former prosecutor, who is now legal advisor to Mohammed Al Amoudi, the Ethiopian born Saudi business tycoon. The wife of Asfaw, Fikremariam Belay, owns 30% of the ownership of the 106 room hotel, that costs 12 million dollars. The hotel is scheduled to begin operation in June.

Investigations are also underway on properties owned by Asefu Fente, the wife of Simon, who owns a printing press and other properties with suspicious financial sources, according to people close to the investigation.

According to sources close to the political developments unfolding in Ethiopia, divisions within the TPLF, a small clique that runs the country with iron fist, has led to Bereket Simon’s resignation and eventual corruption investigation. Bereket was also fired from his position as Board Chairman of the Commercial Bank of Ethiopia.

The TPLF is in a marathon of closed meetings in Mekelle for several weeks now.

A faction led by Abay Woldu, the chairman of the Front, is reportedly losing control and domination within the Front. Abay’s faction was the group that favors Mr. Simon. But the opposing group that’s now holding the upper hand in the tense meeting in Mekelle, that is led by Sebhat Nega, a founding member of the Front, has reportedly ordered investigations against Bereket and those whom they want to eliminate, the source said.