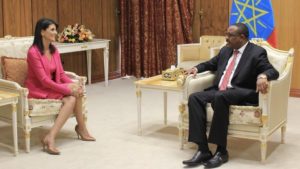 United States envoy to the U.N., Ambassador Nikki Haley is in Ethiopia as part of her visit to three African countries, her first visit to the continent since President Donald Trump took office.

Her visit to Ethiopia came at a time when renewed anti-government protests, coupled with deadly ethnic violence, has casted a cloud of fear of civic strife in the horn of Africa country seen by the U.S. as an important ally in the fight against terrorism.

Unrest renewed in Ethiopia, especially in the Oromo region of the country after a one year respite and has already claimed the lives of many and displaced tens of thousands of people.

Opposition groups accused that ethnic violence, especially among the Oromo, Somali and Amhara communities has been instigated by the TPLF regime which they say is in an internal crises of its own making; while others accuse that indifference by the regime to the unfolding crisis show complicity.