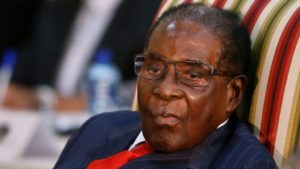 Dr. Tedros Adhanom, the new head of the World Health Organization has named Zimbabwean President Robert Mugabe a goodwill ambassador for the agency, in what a STAT reports said was a move that has startled public health experts.

The report said the WHO director-general, Tedros Adhanom Ghebreyesus, made the controversial announcement on Wednesday in a speech at a global conference on noncommunicable diseases in Montevideo, Uruguay.

Tedros, as he is known, described himself as “honored” that Mugabe — whose government has repressed protesters and has been implicated in widespread human rights violations — had agreed to serve as a goodwill ambassador on noncommunicable diseases for Africa. Those diseases include conditions like heart disease and cancer.

The news has been met with disbelief by public health experts, the report said.

“Mugabe’s record in Zimbabwe involves so many things antithetical to the ethos of the global health community that this move by DG Tedros is unsettling,” Fidler told STAT in an email.

A number of organizations that attended the Montevideo conference said in a statement after the announcement that they could not recognize Mugabe as a WHO goodwill ambassador.

Among the organizations were the Global Alcohol Policy Alliance, the World Heart Federation, the Cancer Council of Australia, and the nonprofit group Vital Strategies.

The statement said the signatories raised their concerns with Tedros during a meeting at the conference.