His judgement in question, Dr. Tedros Adhanom urged to leave post; Ethiopian activists say: we told you so 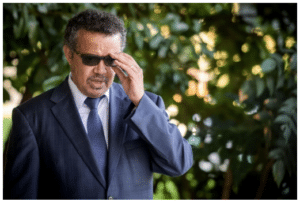 Tedros Adhanom Ghebreyesus stands outside the WHO headquarters on Monday in Geneva. (Fabrice Coffrini/AFP via Getty Images)

The new head of the World Health Organization, Dr. Tedros Adhanom Ghebreyesus was urged to leave his post as the Director General of the world’s health agency.

A columnist for the World Politics Review and a regular CNN.com opinion contributor, Frida Ghitis, said in an opinion published in the Washington Post that Dr. Tedros’ judgement was in question when he nominated Robert Mugabe as a goodwill ambassador for Non-Communicable Diseases.

The writers said Dr. Tedros’ actions should be investigated to see if the “appointment to a brutal human rights violator was the result of corruption.”

Ghitis said many lauded the choice of the first African to lead the organization. “But not everyone was so sanguine. Electing him required overlooking his long record as a major figure within a repressive regime. The government he served has been accused of torture, repression and electoral fraud.”

Ethiopian human right and political activists approached by ESAT to comment on the article said that was exactly why they campaigned against the appointment of Dr. Tedros as WHO Director General. They reiterated that as a member of the inner circle of the TPLF, a clique that is responsible for mass killings and incarceration of its political opponents as well as members of civic society and journalists, he should not be at the helm of an institution that is in charge of the health and wellbeing of the people of the world at large.

“If an investigation proves that giving this prestigious appointment to a brutal human rights violator was the result of corruption, Tedros must leave. In fact, Tedros’s tenure should already be regarded as probationary, and his judgment in question,” Ghitis wrote.

Ghitis went on to say that “the WHO director’s decision to honor the dictator is a misjudgment of breathtaking proportions. The stain it has left on the WHO will not be easily cleansed. We must find out what was behind it.”

The writer said Hillel Neuer, executive director of the watchdog organization UN Watch, told her that “ ‘It’s clear that this was a prize, if not compensation, for something.’ Tedros may have been rewarding Mugabe for supporting his nomination to the WHO post last year, when Tedros was Ethiopia’s foreign minister and Mugabe headed the African Union.”

“Some speculate that Tedros’s decision to appoint Mugabe was a pay-off to China, which worked tirelessly behind the scenes to help Tedros defeat the United Kingdom candidate for the WHO job, David Nabarro. Tedros’s victory was also a victory for Beijing, whose leader Xi Jinping has made public his goal of flexing China’s muscle in the world.”

“The U.N.’s problems will not disappear if Tedros leaves. But it’s important to send a strong signal that such appalling events are not acceptable. Tedros has not apologized for his scandalous decision to Mugabe’s victims, to WHO staff, or to the international community. This matter is not closed.”