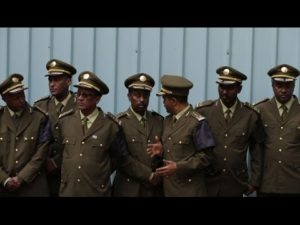 An Ethiopian General has sought asylum in the U.S. after attending an international conference in Washington, DC last month.

Brigadier General Melaku Shiferaw has served with the military intelligence of the regime’s defense force and as a military attache in a number of African countries.

The General came to the United States last month with a delegation led by Foreign Minister Wokineh Gebeyehu to attend the Global Coalition to Defeat ISIS, a coalition of 72 countries for a security partnership spearheaded by the U.S.

Shiferaw was promoted to Brigadier General in September 2016 and was a member of the Amhara National Democratic Movement (ANDM), one of four parties forming the ruling EPRDF.

Over 20 Generals have left the regime, fired or forced into early retirement in the last 10 years.

Ninety per cent of the brass in the Ethiopian defense forces are from the Tigrayan ethnic group, which the oligarchy in power hails from. Those in jail or forced into retirement are Amhara and Oromo.

In a related news, the head of protocol for the Ethiopian Prime Minister has stayed behind after attending the 72nd United Nations General Assembly in New York.

Baye Tadesse Teferi told the VOA Amharic service that he made a decision to seek asylum in U.S. because on several occasions he had been threatened by members the security of the regime who wish to get access to the Prime Minister’s office without the proper security procedure.

He said he feared for his life cause Tigrayan intelligence and security who had on a number of occasions tried to get access to the office of the Prime Minister, but were stopped by him, hurled threats at him. He also said he was targeted because of his ethnic background as an Amhara.

Divisions and strained relations between people in official government position on one side and Tigrayan intelligence and security on the other has also been the reason for his decision to stay in the U.S., Teferi told the VOA.