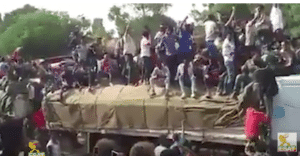 Regime’s security forces killed three people in Ambo in an attempt to free trucks loaded with sugar that were held up by residents. One of the victims was said to be an officer with the regional police force.

Residents of Ambo and the nearby town of Guder have held up several trucks loaded with sugar hindering the progress of the merchandize that has become a precious commodity in Ethiopia.

The price of sugar has been skyrocketing in Ethiopia in the past few weeks. The youth in Ambo took matters in their hands, holding up the sugar trucks, and were planning to distribute to residents.

According to ESAT sources, one of the trucks was set on fire by the protesters.

Residents of the two towns burnt tires and blocked roads with rocks and tree logs.