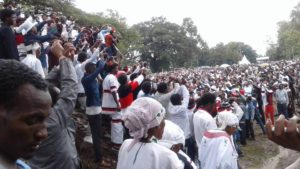 Scores of people were arrested on Sunday following anti-TPLF protests at the annual Irreecha festival in Bishoftu a.k.a. Debrezeit, 25 miles outside the capital Addis Ababa, according to information received by ESAT.

The religious festival on Sunday turned into protest rally with thousands of festival goers chanting anti-TPLF slogans and demanding freedom for the Oromo people. “Down, down, Woyane!” protesters chanted. People from other ethnic group have also joined the Oromos at Sunday’s festival which also marks the one year anniversary of the death of hundreds of people as security forces fire at the protesting crowd and stampede ensued.

According to ESAT sources, security forces arrested festival goers returning to Addis Ababa by bus at Kaliti who were chanting slogans denouncing the regime and expressing their anger against the killing of their compatriots at last year’s festival. Protesters also demand for the release of Oromo opposition political prisoners calling names of the likes of Bekele Gerba, Dr. Merera Gudina and others.

Festival goers from towns in the Oromo region who were heading to Bishoftu on Sunday were stopped at several checkpoints preventing them from attending the morning festival.

Last year’s festival came at the peak of a widespread protest in the Amhara and Oromo region where security forces killed at least 669 people, by the account of the regime. Opposition political groups and rights watchdogs put the number higher.

Meanwhile, residents of Bahir Dar expressed their solidarity with the Oromo people on the one year anniversary of the death of festival goers in Bishoftu. The residents seized the occasion of a soccer match in the City to remember those who lost their lives at the Irreecha festival and crossed their arms above their heads, a sign of defiance by the Oromos against the regime.