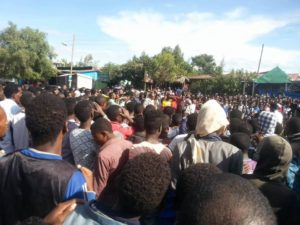 Protesters took to the streets in Ambo, Shashemene, Wollega, Hararghe, Adaba and other towns in the Oromo region denouncing the regime and demanding for the release of political prisoners. Four people were reportedly killed when security forces used lethal force to disperse protesters in Shashemene. At least twenty were injured.

What triggered the renewed protests in the Oromo region today was not clear, but protesters were chanting slogans demanding the removal of the TPLF regime.

It was the first massive protest in the region after security forces killed hundreds of people in protests last summer in the Oromo and Amhara regions.