Ethiopia: Too much emphasis on ethnicity testing country’s federalism 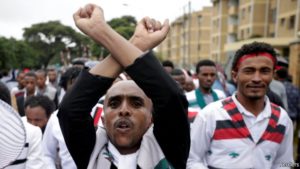 Ethiopia’s ethnic federalism is being tested as the regime gives too much emphasis on ethnicity at the expense of unity, according to an article on The Economist.

The article says the way federalism was implemented in Ethiopia caused problems from the start. “New identity cards forced people to choose an ethnicity, though many Ethiopians are of mixed heritage…boundaries that were once porous became fixed, leading to disputes,” the article said.

“In the past the emphasis was too much on ethnic diversity at the expense of unity,” the Economist quoted Christophe Van der Beken, a professor at the Ethiopian Civil Service University as saying. “The challenge now is to bring the latter back,” he adds.

The Economist said the rulers in Addis Ababa are doing too little and too slow to resolve the ethnic crises in Eastern Ethiopia between the Oromo and Somali communities fuelling suspicions that the regime was complicit.

“We are victims of the federal government,” shouts Mustafa Muhammad Yusuf, an Oromo elder sheltering in Harar. “Why doesn’t it solve this problem?”

Ethnic violence in Eastern Ethiopia displaced at least 70,000 people in what critics say was instigated by the regime.